The 35th Dublin Scout Group was founded in 1928 so on 11th February 2018, they celebrated their 90th birthday, 90 years of bringing scouting to the parish and the surrounding area.

The original scout troop was founded by Mr. Jack Giltrap, a former rover scout, who was invited by Fr. Val Burke, a curate in the parish, to start scouts in Donore Avenue.  The first scouts met in Fr. Burke’s house opposite the church and shortly afterwards moved to the Little Flower Hall in Meath Street.

The group had no permanent meeting place throughout the late 1940’s and 1950’s but met for a few years in a small hall at the back of the then National HQ at 71 St. Stephen’s Green.  In 1961 the group moved to their present location on Arbutus Avenue, Parnell Road and, after various building projects, the den was officially opened in 1986.

The group now consists of 5 sections (Beavers, Cubs, Scouts, Ventures and Rovers) and caters for 120 boys and girls from the area, led by a dedicated, enthusiastic and great group of young leaders.

The Peace Light from Bethlehem

Now in its 34th year, the Peace Light from Bethlehem campaign was originally organised by the Austrian Broadcasting Company and was part of a large charitable relief mission – Light into Darkness, for children in need in Austria and abroad.  Since 1986, there has been a great deal of co-operation between Scouts and Guides in many countries which has allowed the light to travel throughout Europe, so that the light is passed on to 30 European Countries and for the past few years, on to North America, Mexico and Canada.  Each year, a young Israeli scout and a young Palestine scout kindle a flame from the “Eternal Flame” from the Nativity Grotto in Bethlehem where Jesus was born.  The light is then flown to Austria from where it is distributed at a Service of Dedication to delegations from across Europe who take it back, with a message of Peace, to their own countries for use at ecumenical services throughout the continent.  Scouts and Guides can then take the light on to other churches, hospitals, old people homes, prisons and places of public, cultural and political importance – to anybody that appreciates the significance of the “gift”.  In past years the light has been presented to Pope Saint John Paul II, Pope Benedict XVI and Pope Francis and kings, queens, prime ministers and presidents throughout the world and the Peace Light is also taken to Ground Zero in New York, the site of the 9/11 attacks.

In our parish the 35th Dublin Scout Group bring the Peace Light from Bethlehem to St. Catherine’s and St. James Church of Ireland Church and Saint Teresa’s Church on the Sunday before Christmas Day. 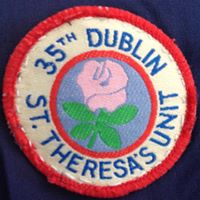