Marcellin Joseph Benedict Champagnat (20 May 1789 – 6 June 1840), also known as Saint Marcellin Champagnat, was born in Le Rosey, village of Marlhes, near St. Etienne (Loire), France. He was part of a group of seminarians who conceived and promoted the establishment of the Society of Mary (Marist Fathers).  He was ordained on 22 July 1816, at the age of twenty-seven, and the next day, travelled to the shrine of Our Lady of Fourviéres above Lyons with others interested in establishing a Society of Mary. The group of young men together dedicated themselves to Mary as “The Society of Mary”.
From the start, he announced the Society should include teaching Brothers to work with children deprived of Christian education in remote rural areas because others were not going to them.
After his ordination, Champagnat was appointed pastor in La Valla, on the slopes of Mont Pilat. Champagnat was struck by the isolation in which people lived and the lack of education in the rural area. This realisation came about at the end of October 1816, after attending Jean-Baptist Montagne, a dying sixteen-year-old who was completely ignorant of basic Catholic teaching.
After witnessing the poor treatment of a student by a teacher, his thoughts on education were shaken. He realised that not enough was being done to help the poor and illiterate in his society. Champagnat acted upon his conviction of the need for religious Brothers and founded the Marist Brothers teaching order.  His quote “To raise children properly, we should love them and love them equally” became the cornerstone of Marist education.  His feast day is 6 June, the anniversary of his death. 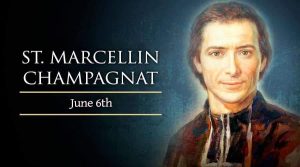